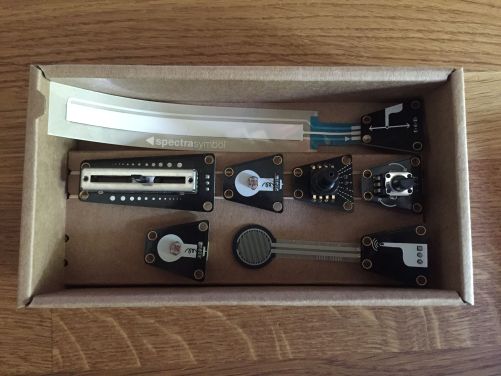 I really like the Ototo board from Dentaku. It’s fun for trying things out and experimenting with ideas. I’ve just bought three new sensors for it, an additional light sensor, a pressure / force sensor, and a ribbon sensor. They’re all very nicely made and to the same high standard as the ones I already have, and, they’ve already been very useful.

But using the board has made me start to think about other aspects of the board. In the Dentaku faq about Ototo it mentions that they’re looking into a way of changing the sounds on the board itself. I think that this would be very useful indeed, as would being able to map the different sensor inputs on any given sound as well. I think it could be done with a simple app either for the desktop of mobile, but it would make the board a lot more useful.

That’s such a huge insult to apes. They would never be as totally stupid as every politician in parliament right now #democracyisdead
This is an excellent #exhibition at the @britishlibrary
Queue outside @roughtradeeast as I left
Waiting for record store day #rsd2019
I didn’t know about this coffee shop before but now I love it! #coffee #carryon #london
I miss dippy