Skip to content
0 comments on “The quantified self, the sonified self”

The idea of the quantified self is not a new one at all. Capturing data on steps, heart rate, weight etc is something that a lot of people do on a regular basis. I’ve been slowly taking this on board for over a year. It started with just step counting but now extends to all manner of data. However, in the last few months I’ve began to extend this into a new concept which I call ‘the sonified self’, that might be something that already exists, but if it does I’m not aware of it. This involved the capture of data, again like steps, motion, heart rate etc and turning that data into sound, or in fact music when that’s possible

I’ve been experimenting with this idea for a few months now, and more recently I think some of my experiments have got to the point where I might even share them. Not in this post, but perhaps in the coming weeks.

Before I do share some of the experimental output I plan to go into more detail about how the process works for me, or at least the component parts of the process and the technologies involved in it. As you might imagine the process involves a number of different devices and apps. However, in the centre of all of this is an app called Holonist. Holonist is in many ways the operating system for my ‘sonified self’ concept. Without it the whole process would not hang together at all.

Holonist really deserves a post all on its own. It’s a complex piece of software and I have barely scratched the surface of it. There’s a lot more to learn and experiment with, and I’m very aware that I am at the start of what could be a long journey.

The next post on this topic will probably focus entirely on the Holonist app itself, after that I’ll cover the process, and, hopefully by then I’ll be able to share some output.

So far I haven’t used the Ether as much as I’d hoped. But one of the things that I wanted to try out was the electromagnetic waves that might be given off by stone circles. A bit strange you might think. Or maybe not.

My first, and probably most nonsensical thought was to try at Stone Henge. I’ve been there before and you can’t get anywhere near the stones. So I emailed English Heritage. No response. Not a massive surprise though. I had thought that they’d at least do me the courtesy of replying, but no. Nothing at all.

The next possibility was to try a stone circle where you can get right up to the stones. Hence Avebury. The Avebury circle is in fact older than Stone Henge. So I thought I’d give this a go. I took my gear and got up close.

The device I use for this is an ‘ether‘. I’ve had this for over a year now. It’s an interesting device, and, when I have used it, I’ve found the output very interesting. However, I haven’t found a real place for it in my creative workflow. Hopefully I will at some point, but I think that I probably need to do some more research.

So that’s that really. I need to think about another use for the device. When I do I expect I’ll write about it.

0 comments on “The sound of the fountains at RHS Wisley”

This is actually 3 fairly short recordings edited together to make a single file. They are all of different fountains at the gardens at RHS Wisley.

Where this sound was taken

END_OF_DOCUMENT_TOKEN_TO_BE_REPLACED

This is something I’m likely to, or rather, hope to explore in my field recording podcast. If you didn’t know about that, you can find more information here.

0 comments on “The quiet world”

I’m not the first to mention that the world is a lot more quiet now. Perhaps not all the people, which is actually a shame, but there is less noise around. Apparently earthquakes are easier to spot as there is less background noise. Birds are making more song, which is lovely, and air pollution is down. These are all good things.

I’ve been recording more things too. Mainly just the quiet of the morning, but other stuff too. So I thought I’d share a few of them with you.

0 comments on “My field recording podcast”

Whilst you’re here, I thought I’d let you know about my field recordings podcast. You can find this on Apple’s podcast platform, Breaker, Castbox, Google Podcasts, Pocket Casts, RadioPublic, Stitcher, and also Spotify.

You can also find an RSS feed of recordings at this URL.

Each episode is a recording of something I’ve found interesting or unique. I hope that you enjoy it something you find there.

I make a lot of music, very little of which I share anywhere these days. For the most part I make music for my own enjoyment, which is much more productive I feel. Anyway, I digress. The point of this is that at the start of the year I decided that I would try to make a small track each day with an app that I really like and enjoy. It’s called Wotja.

Wotja is a generative music system for iOS, although it’s been around a lot longer than that. I’ve actually been a fan of it since around 2007, which kind of puts things in perspective. Of course it’s changed a lot since I first started using it.

Anyway, once again I digress a little. The point of this is that I started on the 1st of January, and so far I’ve kept it up the whole time. So here’s the first. I’ll post the others, probably in small batches, periodically. Hopefully I’ll manage to keep it up all year too.

0 comments on “A bit more about using Kastle synths live” 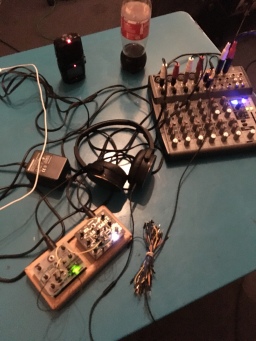 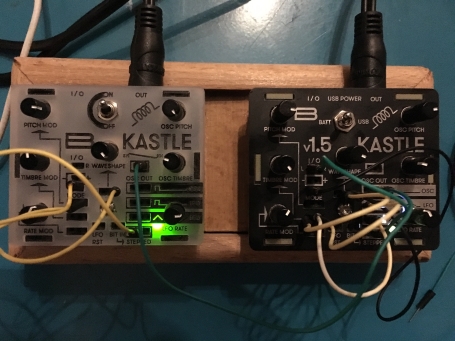 I thought I’d post a little more about the set up for the gig I played at Cafe Oto earlier in the week. I thought it might be useful or interesting to see the devices I used.

Originally, when Robyn asked me to do this, I thought I would use these plus an Olegtron 4060 (MK I). In the end the Olegtron was too complex and difficult to change patches with any speed.

So ended up with the 2 Kastle synths, a 1.0 and a 1.5. Actually the mix of the two is really good and works very well. Patching across the two devices makes for some very interesting possibilities.

What I’ve realised is that I really need a simpler way to load patches. Not physically of course, but a way to record patches. I thought that taking pictures would help, and it did, but it wasn’t the easiest way to recreate a patch. My next thoughts were to write down the patched information. That was my solution for the Cafe Oto gig, and it worked ok. But only ok.

So now I think I’m going to have to create my own patch sheets for the Kastle 1.0/1.5, and, when I do, I will post some templates here.

0 comments on “Laurie Andrerson, Nothing in my Pockets” 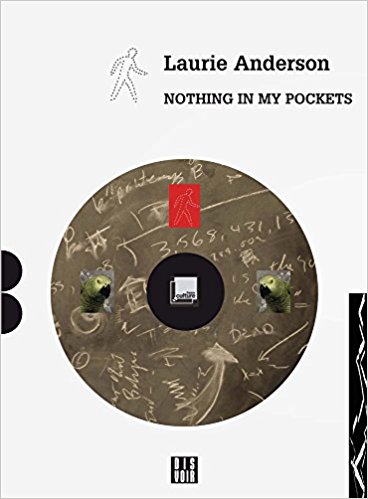 I was given this book as a present a while ago. I hadn’t heard about the book, or the recordings before this, so it was a very nice surprise.

I’ve just finished reading the book. It’s short. Very short, but very readable, and very engaging indeed. Bits of it made really me smile, and I can thoroughly recommend it if you’re a fan of Laurie Anderson, or if you appreciate her style of music and performance.

It made me think about what an audio diary or audio journal would be, or indeed should be. It raised some interesting questions about what constitutes meaningful and engaging sound. These are all good questions. I don’t have any answers as yet, but they’re definitely on my mind, and, as and when I do have some answers, I’ll let you know.

0 comments on “Soundhouses: The Radiophonic Workshop at 60” 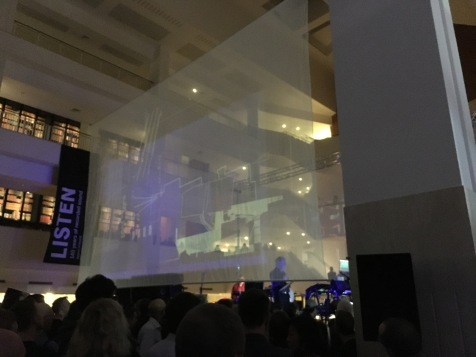 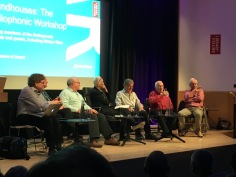 I’ve been a fan of the Radiophonic workshop even before I knew who they were. Since I started watching Doctor Who. I could probably say that their music was a contributory factor to me being interested in electronic music. So whenever I can get to see them, be that a talk or a performance, I make the effort.

The best part of this evening was the talk. In fact it was the best part by far. That’s not to say that I didn’t enjoy the performance, I did. I was just a lot more interested in their stories and hearing about how they did some of the amazing things back at the height of the workshop’s era.

The best part of the talk by far was the description of how the original Doctor Who theme was made. They had a multitrack version that showed all of the individual parts of the track and how they work together. Of course, Delia didn’t have anything like this when she made it. She had to splice individual notes for each and every track.

They had great stories too. Stuff about how they made things. How they solved problems and made incredible music in a totally analogue environment. It was awesome.