The weekend has been a wash out and I’ve not managed to do any of the things I wanted to so I need to think of different ways to make time for doing things I want to do, and that’s not easy. But then neither is the alternative.

0 comments on “Where do they get all that metal” 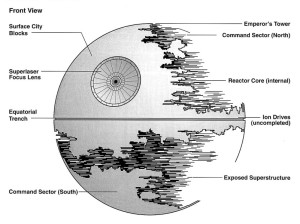 I love sci-fi films, but I always wonder where they get all the metal from to build these huge fleets of spaceships and space stations and the death star is a case in point!

0 comments on “Why didn’t Thunderbirds work as a remake?”

As I’m watching this right now I thought I’d share some thoughts on the reasons why it didn’t work as a 21st Century franchise. The original series was brilliant. There’s no doubt about that, and actually the 2004 version had a lot of good points. It had a good cast (Lady Penelope and Parker were brilliant in fact), some great special effects and  the story wasn’t too bad either.

But where they went wrong in my opinion, is in trying to move away from the central thrust of the story. They tried to make the children an integral part of the story instead of it just being about disasters and awesome machines. I think that if they’d stuck to the formula it would have had a much better chance.

It’s a shame really as I think it would have made a good franchise really, but it wasn’t to be.

0 comments on “More Dr Who”

I’ve been getting back into the 8th Doctor audio stories of late. I’d kind of fallen away from listening to them. That is, up until recently.

I’ve just bought another 5 8th Doctor CDs which should keep me busy for a little while at least. They only take me up to the end of season 3 so I have all of season 4 to look forward to now.

0 comments on “Wash out”

Some days things just don’t go to plan. This weekend fits that description very well indeed. I had loads of things planned, and the chance of doing any of them = 0.

I guess that sometimes things just don’t go your way and you have to accept it, but weekends are precious and when they don’t work out it feels like a very big let down.

0 comments on “Inception and the oscars”

Why is it that science fiction films don’t do well with awards? Ok, this year, pretty much everything has gone to the King’s Speech. Fine, it is a landmark film. I get it. But even so, sci-fi films just don’t win so much.

Now I can understand it when it is films where the special effects are more important than the story, but what about films like Inception and District 9? Inception was a great film with great concepts and performances too. As for District 9 it was incredible.

I took this on Tuesday and really liked it. It is a nasty little tunnel, not particularly clean or well kept, but the picture gives it a very different quality indeed.

0 comments on “Blancmange Single is out: Drive Me”

Blancmange release a single from their forthcoming album called ‘Drive me’. I love the song already as it is quirky and fun and has excellent lyrics.

I am really looking forward to this album even though I’ve already heard a few of the songs from it.

0 comments on “A sad day for Dr Who fans”

I always thought he was an excellent character. He will be sadly missed.

0 comments on “Things to look forward to in March”

There’s quite a few things I’m looking forward to in March to be fair. Here’s a selection:

There’s a few more too, but that lot is worth waiting for if nothing else. Lots of new music coming. Excellent.