Skip to content
0 comments on “Doctor Who, The Pursuit Of History”

I’ll let you know when I’ve heard it.

0 comments on “Doctor Who, Shadow of the Past”

This was a recommendation from the Big Finish site and I thought I’d really l really wanted to hear it because it was read by Caroline Johns herself and I thought her Liz Shaw was a great companion.

This story was excellent. A bit more cerebral a story and I was glad for it. I have to say that I really enjoyed it and so much so that I think I’ll probably try a few more Liz Shaw stories.

I got this on sale from Big Finish and really enjoyed it quite a lot. I’ve never really tried the first doctor stories so I’m really dipping my toe, but it’s good so far.

0 comments on “So I listened to the new 10th Doctor Stories, here’s what I think”

It took me a while to get round to listening to this set of stories, but I managed to finish it yesterday. I have to say that I was really looking forward to getting into this, but was slightly surprised that it was only 3 stories and not 4. That said, I was pleased that this came out at all as I do think that the Donna companion has been one of, if not the best companion of the new Doctor Who.

Anyway, the stories themselves were good. Pretty much in keeping with the TV episodes with the same characters. I did enjoy them overall. I can’t say that they were the best ever, but they were good. The other stuff in the ‘box set’ was only ok. I’m not sure why Big Finish put in the music from each story as a separate track. It’s ok, sort of nice to hear, but not what I’m really buying it for.

As for the ‘extras’, I’m not a massive fan of these in any audiobook. I do listen to them as occasionally you’ll get a real gem or pearl of wisdom from them, but on the whole I listen once and never again. This set had 2 lots of ‘extras’. The first was time I’ve seen that. The first extras was fine. The usual, interviews, chat, etc. However, the second set seemed to be very little to do with this ‘box set’ and far more general, and I wasn’t sure quite why it was there at all.

Aside from those gripes I did enjoy the stories, and that was the main thing after all, so I’m glad I’ve heard it, and I hope that they do another one.

0 comments on “Some (not so new) Big Finish stories”

The lovely people at Big Finish had a bit of a sale over the weekend so I picked up a few bargains. Some of these are stories that I wouldn’t normally get into, specifically the Hartnell stories. But I’m going to give them a go and see what they’re like, which will be interesting in itself.

This season was ok, but I’d have to say that I’m not sure that it was as good as the previous season, or for that matter any of the others so far. Perhaps I need to listen to it again though. I did feel that it came together in the end, and it started well too, it had a lot of promise in the beginning, but I’m just not sure that there was enough going on in these stories.

0 comments on “UNIT Shutdown is here …” 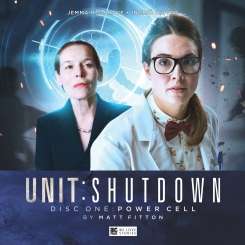 I thought that this first one was good, and here’s the next ‘boxed’ set, along before you know it. I haven’t listened to it as yet, and actually I’m sort of backing up audio books to listen to at the moment.

I’ll get to this one soon enough though, and I’m sure it’ll be good. I mean, it is Big Finish after all!

0 comments on “So I listened to The Two Masters, and it was actually very good in the end”

I wasn’t expecting to enjoy it as much as the first in the trilogy, which I think was the best of all. Anyway, it was ok. I did enjoy it

0 comments on “The Two Masters”

As three stories they work really together.

0 comments on “Fourth Doctor, The Trouble With Drax”

The next episode in the current fourth Doctor season is here. I’m hoping it’ll be a good one as the last one wasn’t quite up to the usual standard in my opinion.